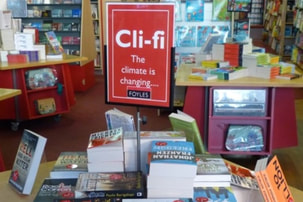 The climate crisis is the gravest challenge facing humanity today, an unprecedented threat not just to humans but to the nonhuman species with whom we share this planet. The scientific work to understand it and address it has to be combined with scholarly efforts to analyse our ethical and cultural engagements with it. Climate fiction has arisen as authors everywhere are inspired to write about the effects of global warming; literary scholars like me are studying these novels in order to understand how they might allow us to do the psychological work necessary to deal with climate change. For some of my thoughts on climate fiction, see my pieces for The Conversation here and here, and other comments on my Media page.

I've been studying climate and literature for over ten years. I was among the first scholars to investigate the phenomenon of climate change fiction, when, in 2009, I became a co-investigator on the ESF-funded project 'From Climate to Landscape: Imagining the Future' at the University of Exeter, an interdisciplinary project that brought together ecologists, geographers and literary scholars. Among the outputs from the literary component of the project, which I led, were Adam Trexler's Anthropocene Fictions and our review of climate change in literature in WIREs Climate Change in 2011 (which I updated in 2016). I have published a monograph on the topic, Climate Change and the Contemporary Novel, and edited Cli-Fi: A Companion (with Axel Goodbody).

​I have since broadened my investigations to consider the history of the relationship between climate and literature. There is a Iong chronicle to be told of literary engagements with climate, a story that helps us to understand our current attitude to climate change. I edited a volume entitled Climate and Literature for Cambridge University Press, and am now editing the Cambridge Companion to Literature and Climate (with Kelly Sultzbach) and writing the Cambridge Introduction to Literature and Climate.

To view my publications, visit my pages at Academia.edu or ResearchGate.